Lung cancer is the leading cause of preventable cancer deaths worldwide, with over 1.5 million deaths per year. It claims more lives each year than colon, prostate, ovarian, and breast cancers combined [1]. It is a complex disease and usually considered as a result of smoking effects and multiple genetic variations. To add to this, lung cancer has a poor prognosis, with no major improvements in the 5-year survival rate for the past 30 years [2].

In the United States alone, an average of 425 people die from lung cancer each day [3]. When looking at lung cancer statistics and distributions, monitoring and surveillance is recommended for women as development rates are disproportionate between men and women. Mortality rates are projected to increase significantly in the coming years. Women are one-and-a-half-times more likely than men to develop lung cancer, and those who have never smoked are more likely to develop lung cancer when compared to men who have never smoked [4]. Controlling for age, the global lung cancer mortality rate among women is estimated to increase by over 40% from 2015 to 2030 [5].

Having explored the current burden of disease, let us better understand risk factors and the complexity of lung cancer, along with promising interventions to aid and curtail this disease. There are a number of factors that may increase the chance of getting lung cancer, some are controlled and others are uncontrollable [6].

Unfortunately, there is no guaranteed way to prevent lung cancer. Only risk factors can be controlled to mitigate their effects. Strategies to reduce risk include stopping smoking, avoiding second-hand smoke, testing living environments for radon, avoiding carcinogens, and living a healthy lifestyle.

The complexity with lung cancer is that it typically does not cause signs and symptoms in its earliest stages. Individuals at risk of getting lung cancer should screen for the disease regularly. The US Preventive Services Task Force recommends annual screening for lung cancer in current and former smokers aged 55 to 80 years who have a 30 pack-year smoking history and currently smoke or have quit within the past 15 years [8]. Note that smoking is the number one risk factor, but it is not the only one. To reduce the burden of disease, a screening test must be able to detect lung cancer at an early stage to allow prognosis modifications, present a low percentage of false-positives, minimize adverse effects (i.e., cancer-induced radiation), and be cost-effective for the health system.

Currently, the most effective method to screen for lung cancer is through low-dose computed tomography (LDCT). LDCT is a unique CT scan technique that computerizes x-ray equipment to produce multiple, cross-sectional images or pictures of the lung. This screening tool has many benefits, including [9]: 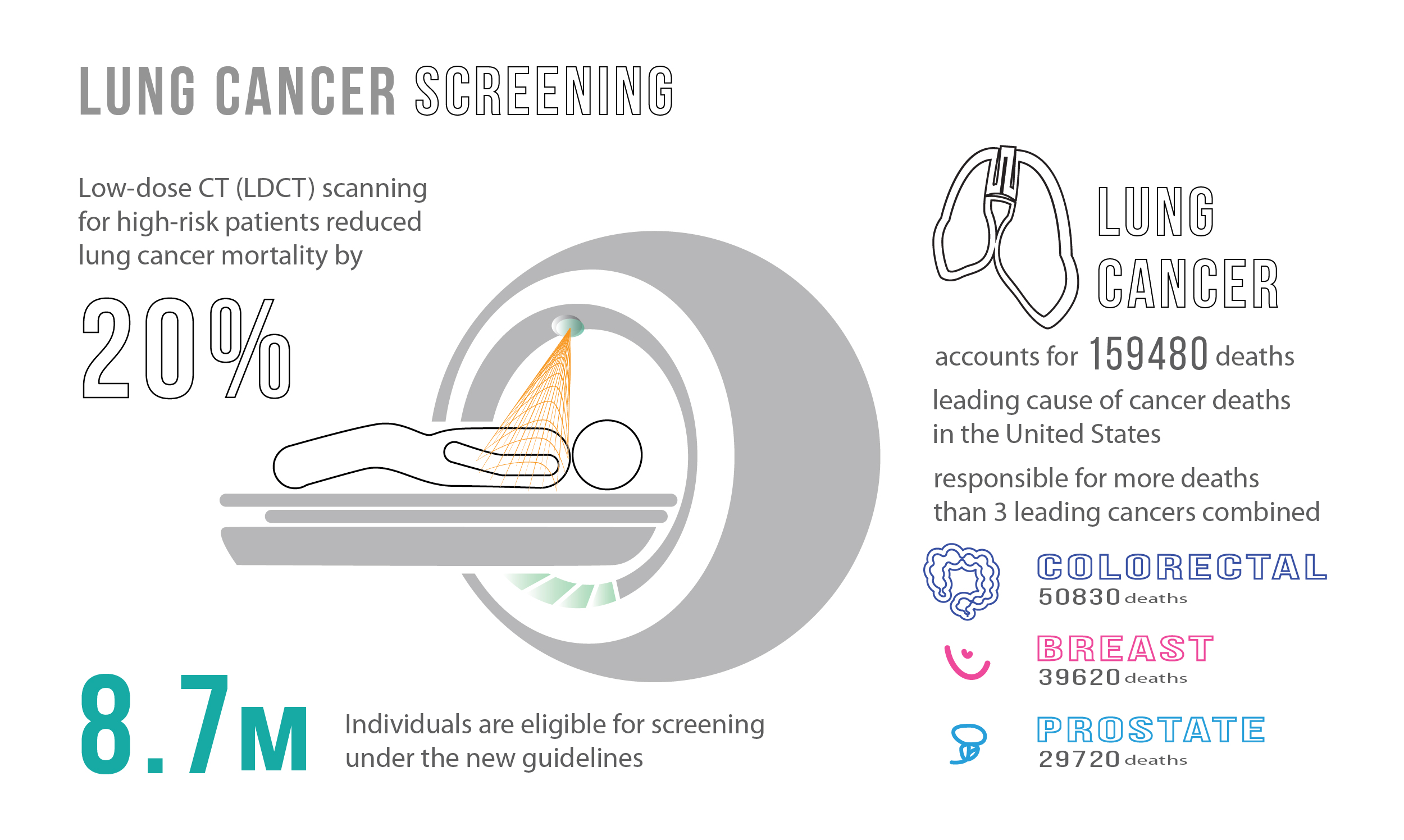 There is variability in cancer, and lung cancer is no exception. Lung cancer is typically divided into two major types based on the appearance of its cancer cells. Treatment decisions are then made by the healthcare team based on the type of cancer diagnosed. The two types of cancer include:

Currently, the main modalities of lung cancer treatment include surgery, radiation, and chemotherapy. Similar to other cancers, early stage lung cancer is treated with surgery (e.g. video-assisted thoracoscopic surgery and robotic surgery), and more advanced cases are managed with chemotherapy and/or radiation therapy. Typically, a team of specialists from different fields work together to determine the most appropriate treatment options for the patient. The care team may include various types of oncologists, pathologists, nurses, pharmacists, and health administrators. Having a multidisciplinary team is especially beneficial when it comes to coordinating complex treatment protocols involving multiple therapies. 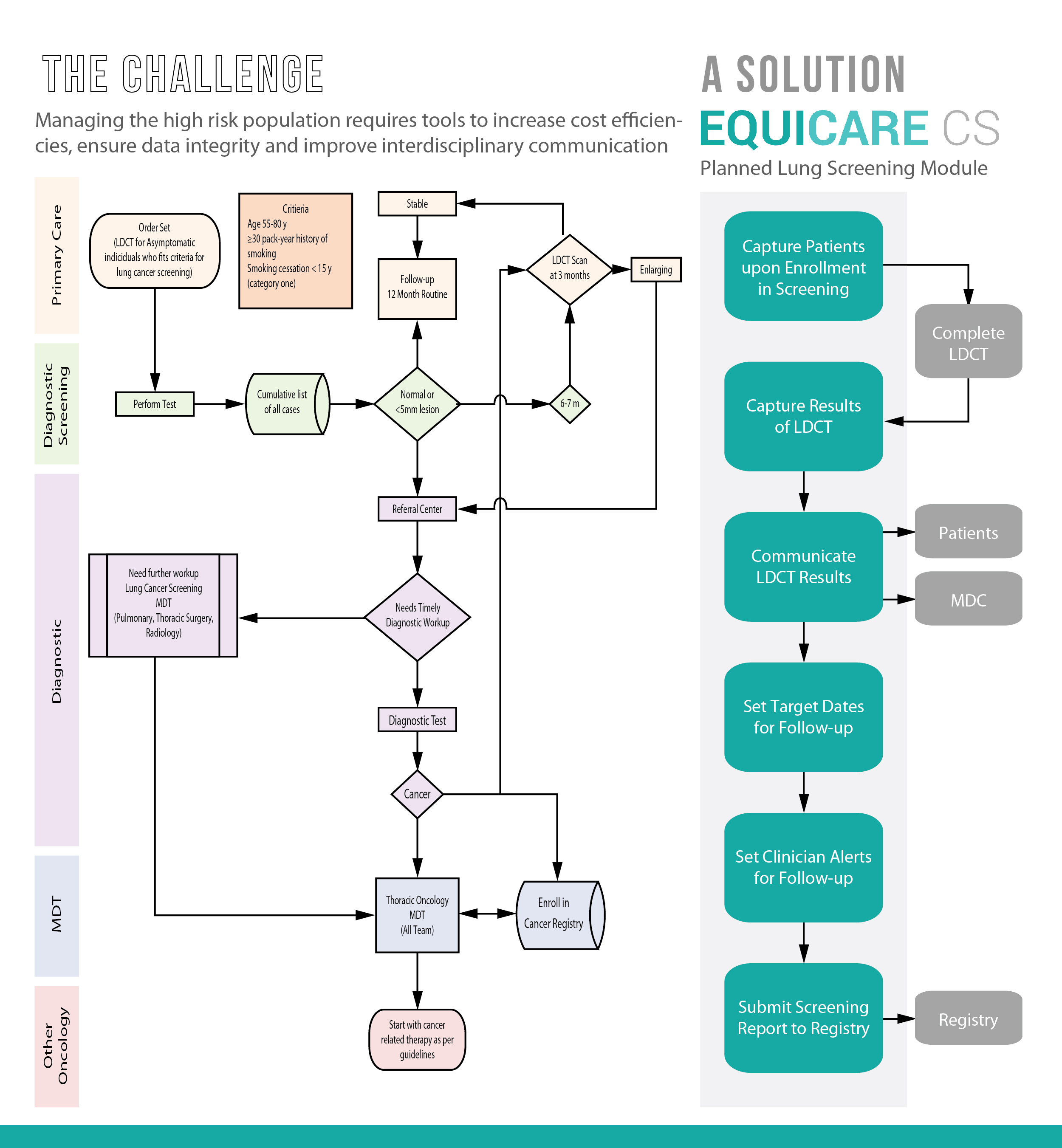 There is continuing efforts to improve the survival of patients with lung cancer, focusing on achieving an earlier diagnosis along with developing new targeted or personalized therapies for this disease. The International Association for the Study of Lung cancer has recently highlighted the importance of immunotherapy, a form of personalized medicine and an encouraging treatment method to fight against lung cancer. Lung cancer patients who respond poorly to standard chemotherapy now have more options: most recently two immunotherapy drugs were approved by the U.S. FDA for lung cancer therapy. Even though the survival rate for many lung cancer types still remains low, new targeted therapies and immunotherapies have the ability to change these statistics and are providing new hope.

Written by Dorri Mahdaviani , who holds a Masters of Public Health (MPH) from the University of British Columbia (UBC). Her academic and professional interests include the areas of chronic illnesses, health care systems and childhood health and development.

Infographics and Design by Ann Wong, who holds a PhD in Biochemistry and Molecular Biology from the Faculty of Medicine at the University of British Columbia (UBC), Canada. She is an author of over 10 SCI publications, having taught at UBC and the Peking University Health Science Center (PUHSC) in Beijing